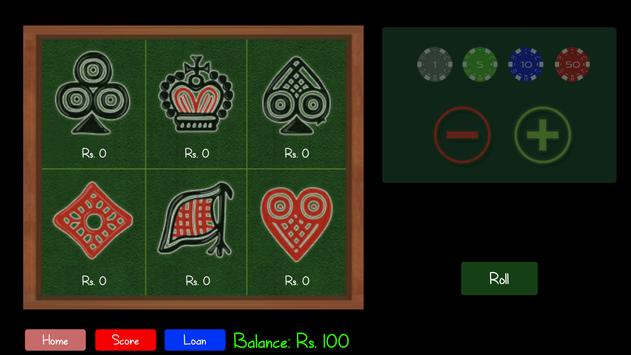 During the 18th century, the British Navy used to play a game called Crown and Anchor. It was perhaps during this time the game spread to areas where they frequented the most. Fast forward a few hundred years, and now this game has become popular in India as well as Nepal. Jhandi Munda or Langur Burja is not so different from the original version of the game. The names are more localised, but the rules remain the same, almost.

Jhandi Munda is more than just a game here. It is a cultural tradition to play it during Tihar, the festival of lights and Dashain in Nepal. If you are walking down a street in India or Nepal during this time, don’t be surprised when you see people playing it on the streets. Groups of people stand around the players on the crossroads eagerly awaiting their turns to have a go. If anything, it adds to the celebrations during this festive time.

Jhandi Munda is a simple dice game that involves a canvas, six dice and a bucket. The game consists of six symbols. Apart from the traditional spade, club, diamond and heart, it also contains two more, anchor and crown. The same signs appear on the six faces of each die as well.

One of the players chooses to be the host while the others place their bets. Usually, they put their money on the different signs on the canvas. The house or the host uses the bucket to shuffle the dice. At the end of the round, the host lifts the bucket. The six faces on the die reveal the winnings of each player.

So, for example, if a player bets on the spade and three spades come up, the player wins thrice the amount they bet. But, if no spade or one spade comes up, then they lose their bet.

As the game progresses, you get your chance of being the host. Then, it is your turn to earn money from other people’s bets or lose money if they win. The game itself is straightforward, but often it boils down to chance and skill.

How the Online Jhandi Munda works

The online version of this game remains the same more or less. Instead of a physical felt mat canvas, it has a digital board. This board consists of the six different symbols that we talked about before. What you need to do is place your bet on the corresponding sign. You can use the slider to increase or reduce your bet.

You can also choose to bet on multiple signs if you are feeling confident. It will allow you to win more money. But, do keep in mind, that you may also end up losing more than usual. In the online version, the casino is the house and that remains constant.

At Rupee Casinos, we have come to realise that simpler strategies often work best. More so when it comes to a game like Jhandi Munda which is the most direct dice game we know.

If you are playing this game but having a hard time to win, try sticking to one symbol. The rules of probability show that it is easier to win and recoup your losses if you hold to one sign. We will not get into the details of the calculations which are mind-boggling in a way.

If you keep shifting with the signs in a bid to change your luck, that might not be your best play. We talked to the experts in this game, and they swear that sticking to one symbol often does the trick. When you end up with multiples of the same sign, you win more than you would if you bet on different signs in the same round.

One of the most challenging aspects of playing online games is choosing the right place to play. That is why you are here at Rupee Casinos, and we are here to help you find the best online casino that suits your purpose.

We take out the guesswork by playing Jhandi Munda in different online casinos and checking which casino provides the best online performance. Check our casino reviews and guides to learn more about our partners who are the best in business.

We want you to know that your hard-earned money is safe with these casinos and you can play as much as you want without worrying!

Rupee Casinos Grand Launch
The wait is finally over. Diwali might be over, but that does not mean ... read more
Dice Games
Be Wise when you Roll Your Dice Open your Chance to Win something Nic ... read more
Card Games
The Right Way to Play Cards The Easy Way to Win Rewards Card games h ... read more
WIN UP TO $200 IN FREE BITCOINS EVERY HOUR! NO DEPOSITS, NO CREDIT CARD!CLAIM NOW